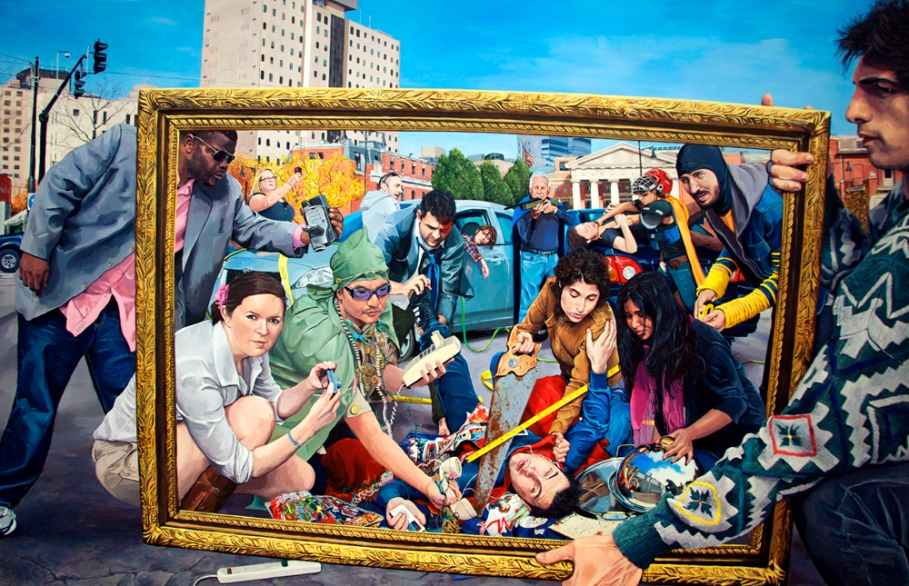 Paul Endres Jr. The Beheading of our Savior David Ocampo in the interest of preservation and future rejuvenation, Seventeenth Day in October, in the Year of Our Lord, Acrylic on Canvas, 62″ x 96″, 2011

Fascinated by the contradictory fictional nature of history and our part, as humans, in its infinite perpetuation, my work is the marriage of epic storytelling and formal subversion.

The ongoing series of paintings, comics, and prose depicts a single sprawling narrative that begins just after a mysterious modern catastrophe: the physical materialization and collapse of history. This event has come to be known as The Burden. In an attempt to secure a powerful relic, the severed head of the super-titan David Ocampo, a bloody civil war erupts among the inhabitants of Burden America, who showcase their twisted reason and folly. The paintings are the memorials to these pivotal events and historical figures of this Cephalophoric War, painted by the doomed fictional artist, P.J. Endres Jr., a master propagandist akin to Jacques Louis David.

Equal parts comedy and tragedy, the content and creation of the paintings of the American Burden is informed heavily by a variety of converging conceptual and visual polarities, including 17th – 19th century history painting with contemporary visual media such as comic books, with social satire always in mind. The paintings and their fictional history are treated and presented with the utmost respect. Theatricality, self-aware characters and intentional chronological errors (of this alternative reality) are meant to question the authorship and validity of the images entirely.

An unspoken yet crucial component to the work is the precise staging and documenting of each scene for use as source material. This phase in the process, involving family, friends, or collogues of whom I have much adoration, ventures slightly into that tentative territory: autobiography. This underlying personal connection to my subjects, coexisting with a distant grandiose apocalyptic history, offers a parallel reading to the work, as well as provides the work’s central contradiction.

Paul Endres Jr. was named by the Boston Globe as one of five artists to watch in 2011. He received his B.A. from Providence College (2008) and his M.F.A from the School of the Museum of Fine Arts, Boston (2011). Paul has been awarded grants and fellowships from the Massachusetts Cultural Council (2012) and St. Botolph Club Foundation (2013). His work has been shown at La Montagne Gallery (Boston, MA), Boston University, and the Essex Art Center (Lawrence, MA). Be on the lookout for a solo exhibition at Childs Gallery in 2014.

Paul Endres Jr. “…History may remember the execution of General Francois Montcalm as a necessary step in proper rebellion squelching, but we who were present at the Fall of Fort Wixon know otherwise..” -From the diary of Abigail Daedalus , Oil on Canvas, 50″x 64″, 2012